Ewell was a royal manor until granted to Merton Priory in 1121, but there were several small estates, some of them independent manors and some held from the other manors. Westminster Abbey claimed 2 hides of land in Ewell by right of a charter of archbishop Dunstan and king Edgar in 959AD, which exists only in a 12th-century fabrication This holding was not specified among the Abbey’s estates in 1086, but its estate in Morden, described in 969AD as 10 hides, was assessed at 12 hides in Domesday Book, suggesting that the Ewell lands were already part of the Morden estate. By the late 13th century, when the extant manorial court rolls and manorial account rolls begin, the tenants of these Ewell properties formed a separate tithing within Morden manor, with its own head tithingman [capitalis decennarius] and ale-taster [cervisie tastator] and, according to a survey of Ewell undertaken in 1408 by Merton Priory, Westminster Abbey’s holding there was called Morden fee.

According to the 1312 Extent, the Abbey had four ‘free’ tenements in Ewell:

Apart from the poultry, these details accord with the custumal of c.1225: ‘From Ewell 30s at the 4 terms and they must come to the five boonworks in Harvest and they owe 10 hens and 1 cock and owe 3d for mowing’, the extra penny rent in 1312 perhaps due to an additional cottage built on part of Cuppyng’s property.

Under the section headed ‘Rent Increments’ a further property is listed: ‘Thomas de St Michael holds 1 cottage and 2 acres land at a rent of 2d at Michaelmas’. A later marginal note reads: ‘He does not know but says that it is assized in Ewell’.

Each of the holders of these tenements owed suit at the manorial court at Morden, but the court rolls show that they frequently defaulted. Sir Robert fitz Neel was lord of the sub-manor of Fitznells in Ewell, and Thomas de St Michael was lord of the neighbouring manor of Cuddington. These properties were still in the possession of the lords of these manors in the late 15th century, and probably beyond. Each had his own manor house, so these Morden fee properties were leased to tenants. From early in the 15th century the Abbey was unable to exact the rent and services due from these tenements, in spite of litigation in the manorial courts and in the royal courts.

Thus in 1456 the abbot’s attorney brought a complaint before the assizes that Richard Benton or Denton had ‘disseisined him of 11s 7d of rent and of the render of 2 cocks and 4 hens … The renders of service arise from one messuage and 30 acres of land with pertinences in Ewell called Quedekepes, which are held from the present Abbot himself, as from his manor of Morden’. Damages were assessed at 5 marks, and with the outstanding arrears together amounted to £17 plus 48 cocks and 80 hens (WD 173b-174). 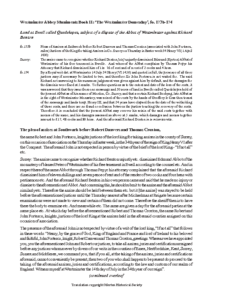 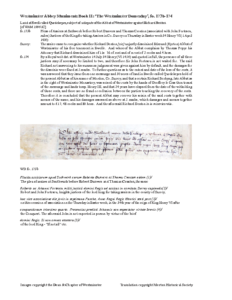 A marginal note in the 16th-century transcript of the 1312 Extent identifies Fitz Neel’s tenement as ‘parcel of the manor called Quedekepe viz built there with 30 acres of land for rent 11s 6d and other services’, but in fact Quedekepes was the tenement held in 1312 by Thomas de St Michael, and previously, in the reign of Henry III, by Geoffrey le Cras. A detailed description of the two St Michael tenements survives from the time of Henry VII (1485-1507), when held by Richard Vynes (WAM 1912). The messuage of Quidekepes included ‘the hall, chamber [edge of membrane damaged] gate with a chamber on each side of the aforesaid gate’. The other messuage is not described apart from the fact that it ‘lies opposite the messuage in which the said Richard dwells, and one lane separates both the messuages aforesaid’. In addition, details are given of 31 acres of land in 7 parcels ranging from 1 acre to 9 acres, held of the Abbey. 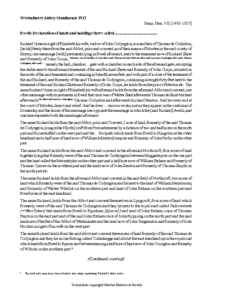 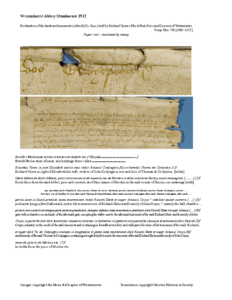 A survey of 1408, published as Register or Memorial of Ewell, Surrey edited by Cecil Deedes in 1913, lists the messuages or house plots for all the Ewell manors in topographical order, and these have been mapped by Philip Shearman, in Fitznell’s Cartulary: A Calendar of Bodleian Library MS Rawlinson B 430, published in 1968 by Surrey Record Society (XXVI), though the plots have not been drawn to scale. Quedekepes is the only Morden fee property that is named, one of the many house plots within the area now occupied by Bourne Hall. The other St Michael plot was almost opposite in Spring Street, while the Fitznell plot was around the corner at the far end of Spring Street.

The Cuppyng or Kyppyng tenement remained in that family until the early 15th century, though odd acre- and ½-acre-plots had been sold over the years. Two cottages had also been sold towards the end of the 14th century, one to Thomas Person and the other to John Shaldeford, lord of the manor of Shaldford, Shawford or Ruxley. One Kyppyng messuage was two down from the St Michael messuage opposite Quedekepes, and another, a toft, was in West Street. John Person’s plot adjoined the Fitznell plot at the far end of Spring Street. Robert de Shaldeford’s plot was at the junction of South Street with the road to Epsom. A further plot, in the occupation of John le Herner atte Welle, was by ‘Cakeswell’, one of the sources of the Hogsmill River. The origins of Herner’s holding have not yet been ascertained, but it is likely to have been another part of the Kyppyng tenement. In 1408 John Kyppyng held 19½ acres of arable in 21 parcels scattered over 11 cultures, plus 5 acres of woodland, but they were not all held of Morden fee.

The initial transcriptions and translations by Dominic Alexander have all been checked and corrected by Dr Mark Page.