In 1312 a detailed survey was undertaken in the form of a valuation or extent, now in Cambridge University Library. As well as recording the tenants and their dues, the various parcels of demesne land were listed, and a value assigned to them. The labour services were likewise given a monetary value, ‘without deductions’ for the allowances of food and drink provided at the lord of the manor’s expense for those undertaking certain services.

Thirteen customary tenants in Morden are listed, holding 12 virgates, together with six ‘free’ tenants whose holdings are not described. It seems, however, that most of these ‘free’ holdings were only free of weekly labour services, and were treated in the same way as the customary holdings, being surrendered at the manorial courts, unlike the true freeholds that were sold by charter. Four ‘free’ properties in Ewell are also listed, three of which were true freeholds, the fourth being surrendered at the manorial courts. In addition, 25 tenants of small properties, usually a cottage or curtilage or odd acre plots, were listed under the heading ‘Rent Increments’. Some of these plots had been encroached from the roadside waste, while others had been carved out of former customary holdings.

A 16th-century transcript of the Morden section of the Extent is in Surrey History Centre: K85/3/28 pp36-39v. The marginal annotations on that may not be totally reliable. Differences between the two versions are noted in the footnotes to the translation.

The translation is by Peter Hopkins under the guidance of Maureen Roberts, and has been checked and corrected by Dr Mark Page.

We are very grateful to Miss J S Ringrose, Deputy Keeper of Manuscripts at Cambridge University Library, for transcribing in 2000 annotations that were not legible on the microfilm. In 2020 Cambridge University Library supplied high-resolution images which have enabled some corrections to be made, and the Library has kindly allowed us to reproduce these images alongside our revised translation. 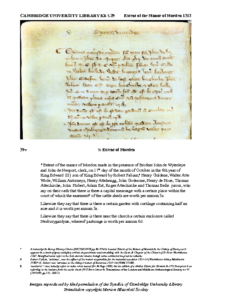 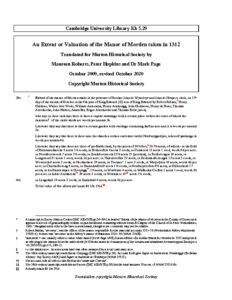