WAM 1882 (c) The Dean and Chapter of Westminster

There are several tax receipts, for both royal and ecclesiastical taxations, which include valuations of the manor and the parish church. Two examples have been transcribed and translated below and the rest have been summarised here. 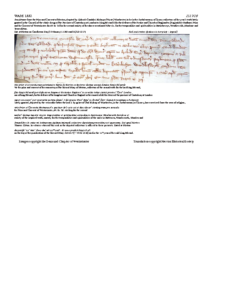 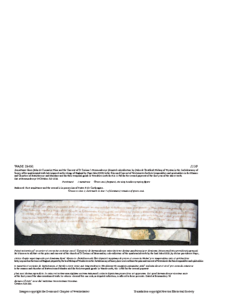 The transcriptions and translations are by Dr Shelagh Mitchell.

The ‘Foreign expenses’ section of the Morden manorial account roll of 1290/91 records the ‘expenses of assessors of a certain tenth for the use of the lord King’.1  This probably refers to the lay subsidy required of the inhabitants of Morden. The ‘Foreign receipts’ section for 1294/95 includes, ‘The same renders account for 63s 8d for the tenths of the customary tenants’.2  This cannot refer to church tithes, as the rectory had not yet been appropriated, so it must be the tenth granted in 1294 to Edward I,3  collected from the customary tenants for forwarding to the tax collectors. In 1306/07 the ‘Foreign expenses’ section has the entries: ‘Also given to the 12 assessors of the thirtieth penny for the use of the lord King 2s. Also payment for the same 15s 6½d ¾d by 1 tally.’4  In 1306 twelve men from each hundred had been appointed, with the assistance of the reeve and four lawful men of each vill, ‘to make a true valuation of the movable goods possessed by the people on a specified day’, for tax assessed at a thirtieth in rural areas and at a twentieth in urban districts and ancient demesne of the Crown.5  However, conventional valuations were often made, all cows, oxen, etc being assessed at the same value irrespective of age, health, etc. Agricultural equipment, household goods and goods in the larder were normally exempt.

The ‘Foreign expenses’ section of the accounts for 1327/28 records 1 shilling ‘In expenses of sub-assessors for the 20th of the lord king’, and that for 1332/33 includes the steward’s expenses ‘For coming to the Court held there to assess tallage for the taxes of the lord King 2s. total geld’.6  In the 1332 taxation, published by Surrey Record Society, six named [‘free’] inhabitants of the ‘vill of Morden’ paid a total of 8s 9d, and a further 11s 5¼d was raised from nine named ‘villeins of the abbot of Westminster in the vill of Morden, deducting their rents and services’, levied at one-fifteenth of the value of their personal property.7  Three Morden villeins were taxed even though their holdings were valued at less than the minimum level of taxation. When the assessors visited, they included grain and goods due as rent to the abbot. The valuation was subsequently adjusted, but their immunity to taxation was overlooked.8