A large workhouse for the destitute and homeless was built on the Common in 1782, surrounded by vegetable and flower gardens, and an infirmary for the sick and elderly was added in 1793, furnished by Henry Hoare, the banker, at his own expense. The Vestry successfully resisted the enclosure of the Common, proposed by local lords of the manors during the Napoleonic Wars, arguing that the retention of the Common, with its grazing and rights to firewood, was essential for the economic well-being of the poorer residents of the parish. 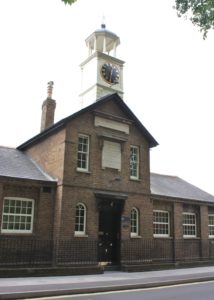 In the late 18th century several of the larger houses in Mitcham came to be used as boarding academies for the sons and daughters of the gentry. The boys at the Baron House Academy in Lower Mitcham had the thrill of performing before Admiral Lord Nelson and his house guests from Merton Place shortly before Christmas 1801. Elementary education for the village children took a great step forward with the foundation of the National Schools in 1812.

Alongside the textile mills in the latter part of the 18th century there were flour, copper, paper and snuff mills. Steam power was becoming available, but needed coal, the transport of which overland was prohibitively expensive. In 1801 the Surrey Iron Railway, the first public railway in the world, was authorised by Parliament. The track through Mitcham ran along what is now Christchurch Road and Church Road, alongside Tramway Path, and across Mitcham Common. The modern tram route from Mitcham to Croydon largely follows the track-bed of the Surrey Iron Railway. Worked by horses, the undertaking subsequently failed in competition with the steam-powered railways, which were expanding rapidly in the 1830s and 40s. 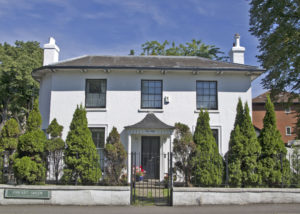 The period 1793–1815 was one of general prosperity. The population increased by 20% between 1801 and 1811, and elegant villas in the new Regency style appeared in various parts of the village. In contrast, in an economic depression after the Napoleonic Wars three of the larger estates, Colliers Wood, Biggin Grove and Elmwood, were auctioned in 1822, and bankruptcies became common amongst the calico printers, many hands being laid off. Between 1821 and 1831 the population of Mitcham fell by 66 to 4,387. The Tate Almshouses overlooking the Cricket Green date from this period, the land being given and a charitable trust for their upkeep established by Miss Mary Tate in 1828.