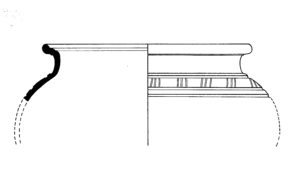 The line of Stane Street, an important element in the Roman road system, survives on the borders of Mitcham as Colliers Wood High Street. On the western bank of the Wandle, in the vicinity of Phipps Bridge, a small roadside settlement flourished throughout the Roman period. On what is now the site of Haslemere Primary School, ditches containing pottery dating to the 1st and 2nd centuries were found in 1965 close to three undated burials. When a gasholder was being constructed near Western Road in 1882, a Roman well was discovered, containing at its bottom a fine jar of 2nd century date. Fragments of Romano-British pottery of 3rd/4th century have come from excavations elsewhere in Mitcham.