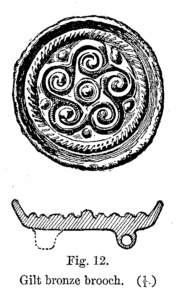 The actual location of the village of ‘Micham’ – the big settlement, as it was known by the 7th century – is not certain. Some 230 burials were found in 1919 and the early 1920s during excavation of a cemetery which lay either side of Morden Road, Mitcham. The interments were of heavily armed men and their womenfolk, the weapons, jewellery and pottery indicating dates from perhaps as early as AD 450 to about AD 600.

What may be the earliest documentary reference to Mitcham appears in a 13th century transcript of charters of the Benedictine abbey of St Peter at Chertsey, that were claimed to date from the early 8th century, confirming the royal grant of lands in north-east Surrey to the abbey soon after its foundation in AD 666.

Two mills that used the Wandle as a source of power can be traced to the late Saxon period: one may have been a little upstream from Mitcham Bridge, and the other seems to have been in the vicinity of Phipps Bridge. The ‘boundary of the people of Mitcham’ or ‘Michamingemerke’ was already established by 967, the year of a royal charter.

A second article in