By the 13th century a considerable part of central Mitcham lay within the estate of Baldwin de L’lsle, Earl of Devon and Wight, as part of his manor of Vauxhall. From the 13th century until the Dissolution in 1538, patronage of the church, and land within the parish, were in the hands of Southwark priory.

Towards the close of the Middle Ages the manorial system had become well established in Mitcham, and much of the parish fell within the jurisdiction of no fewer than four manors, Biggin and Tamworth, Vauxhall (extending from Phipps Bridge to Commonside West), Mitcham Canons and, to the south and west of the parish, the manor of Ravensbury (extending across the Wandle into Morden). 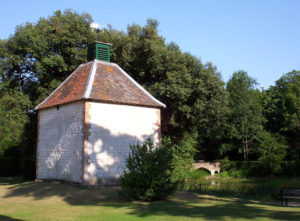 The Dovecote and Pond, The Canons, Mitcham (R Ninnis) 2005

Mitcham Common fell within the claimed jurisdiction of all four Mitcham manors, and of the manor of Beddington. Inability of the lords of these manors to agree on the extent of their interests fortunately resulted in Mitcham Common surviving the enclosure movement of the late 18th and early 19th centuries and remaining largely intact.

Of the 13th-century parish church only the base of the tower was retained during reconstruction in 1819–1822. The dovecote in the grounds of The Canons bears the date 1511, and is the oldest complete structure still standing in Mitcham.

As early as the mid-14th century Mitcham was attracting merchants of the City of London to build grand houses and settle within the parish.

The Mauduit lords of Mitcham in Bulletin 135