A large post-Roman or ‘Anglo-Saxon’ cemetery was excavated by Harold Bidder and members of his family between 1888 and 1922. A definitive article by Bidder and John Morris on the cemetery and the grave goods recovered has appeared in Surrey Archaeological Collections LVI (1959) pp.51-131 – accessible at http://archaeologydataservice.ac.uk/archives/view/surreyac/contents.cfm?vol=56.

The main concentration of burials lay either side of Morden Road, between Mitcham station and Ravensbury Park, but other interments have been found to the north, almost as far as the parish church. 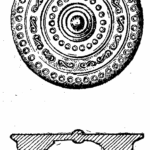 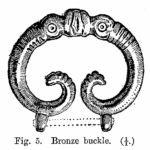 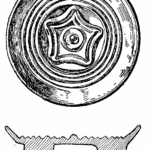 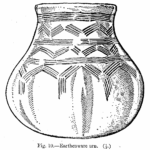 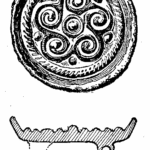 It had been known for well over a century before the Bidders’ excavations that human remains were to be found at Ravensbury, but the full significance of the finds was not appreciated at that time, and it was not until Harold Bidder took advantage of his family’s ownership of the former Mitcham Grove and Ravensbury estates, and the opportunity afforded by the excavation of the sand and gravel deposits lying beneath the fields and meadows bordering the Morden Road, that the extent and significance of the cemetery came to be realised. 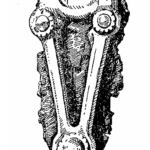 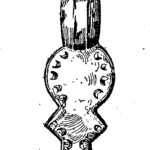 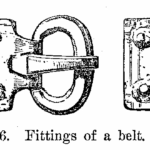 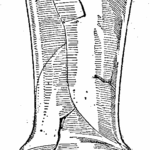 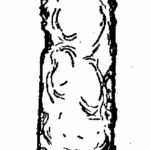 One of the largest in Surrey, the cemetery appears on the evidence of the grave goods to have been in use for a period of some 150 years, at least two interments in Morris’s estimation being from early in the 5th century, whilst the latest took place a little before 600. Over half the 238 burials recorded were dated by the reported associated finds, composed mainly of weapons, belt fastenings, brooches and other articles in distinctive Saxon styles. Some burials unaccompanied by grave goods could well lie outside this range, and of course nothing can be said of the many hundreds robbed or destroyed without record in the past. The implications of what we do know about the cemetery are obvious, however – some of the burials at Mitcham could have been of late Roman date, and use of the cemetery continued into the 6th century by people of both Romano-British and Saxon origins.

The illustrations reproduced on this page are from an earlier report by Harold Bidder in Surrey Archaeological Collections XXI (1908) pp.1-14, by kind permission of Surrey Archaeological Society. The article is accessible at: http://archaeologydataservice.ac.uk/archives/view/surreyac/contents.cfm?vol=21