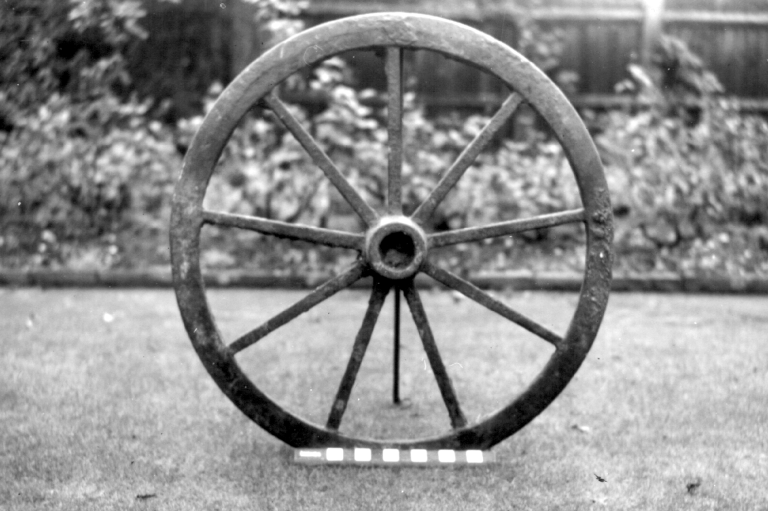 A wheel from the Surrey Iron Railway, found in the River Wandle

The Surrey Iron Railway was authorised by an Act of Parliament in 1801 and was the first public railway although predated by private railways used exclusively by the owners for moving their own goods. Tolls were levied on carriers for their use of the tracks.

The main Wandsworth to Croydon line ran from the basin at Ram Creek, Wandsworth, through Earlsfield, Tooting, Mitcham and Waddon to its terminus at Pitlake, Croydon and was opened on 26th July 1803. The following year a branch was opened to Carshalton. The main routes were double track but a single-track branch was built from Croydon through Coulsdon to Merstham in 1805.

The track comprised iron L-section rails 4ft 2in (1.27m) apart secured onto stone blocks. The trucks were horse-drawn, typically 8ft x 4ft x 2ft deep (2.44 x 1.22 x 0.61m deep) and weighing about 1 tonne. They could carry 3 tonnes of coal, lime or grain. One horse could pull up to ten wagons but the usual number was about four.

The use of the Surrey Iron Railway railway declined as steam railways were built locally, and it was closed to traffic on 31st August 1846. Subsequently much of its track-bed through Mitcham to Croydon was used for the Wimbledon – West Croydon railway which was opened in 1855. This was closed in 1997 to re-open in May 2000 as part of the Croydon Tramlink system.

The Wandle Industrial Museum have published The Iron Railways of the Wandle Valley. Contact them on www.wandle.org