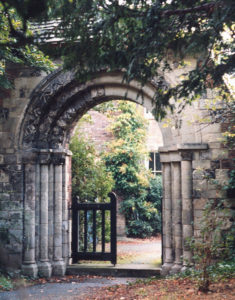 By 1066 the estate was held by another leading Saxon magnate, Earl Harold, who took the throne on the death of Edward the Confessor. Following Harold’s defeat at Hastings, it became a royal estate.

(The entry also mentions 16 dwellings in Southwark belonging to this manor, and two other remote properties – 2 hides in another Hundred within Surrey and 2 sulungs in Kent. The observation that the holder of the estate paid more than its value suggests that it was leased to a tenant at this time.)

Around 1114 Henry I granted the estate to Gilbert, sheriff of Surrey, Huntingdon and Cambridge, who founded a priory here.

Although a church is recorded here in 1086, an account of the foundation of Merton priory states that Gilbert built a new church here, which he ‘decorated beautifully with pictures’. His plan had been to create a monastery around this church, but the prior whom he appointed preferred a site near the Wandle, where the water supply was better, so the buildings that Gilbert had erected were dismantled and moved to the new site, which they occupied from 3 May 1117. The account records the sadness he experienced in seeing his beautiful church taken down, but he had been able to lay the foundations for a splendid stone church by the Wandle shortly before his death in 1125. It is not known when the present St Mary’s church at Merton Park was begun, but it clearly dates from the 12th century.