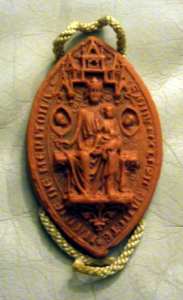 We have much information about Merton priory, both from surviving records and from archaeological research, but we have little information on Merton itself. The earliest extant manorial court rolls date from the 1480s, and reveal that the main area of settlement was in the area around the parish church, and along the main road from Merton Rush to the house now named Manor House, 120 Kingston Road, though in fact it is only a copyhold property. It was not until the 18th century that the housing was extended as far as the turnpike gate at the present South Wimbledon crossroads.

Originally each tenant had been allocated a number of narrow strips of land of an acre or less scattered across the open fields but, by the time our records begin, most of these holdings had come into the hands of a few large landholders, many of them London merchants, and by around 1500 the priory had gained possession of all but a handful of strips. By the time the priory was dissolved, in 1538, most of the land was leased out in large farms – Merton Grange in the east outside the priory gates, and West Barnes in the west. The priory retained as demesne land some meadow and pasture land beside the streams and at Cannon Hill, while the common, which lay north and south of the present Martin Way, survived into the early 19th century.