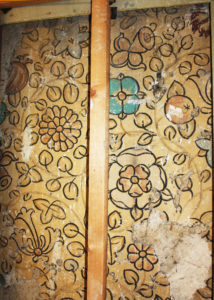 Lordship of the manor remained with the Crown until 1610, when it was sold to Thomas Hunt, whose descendants retained it until 1699. Apart from the manorial right to receive rents and to hold courts, the manor estate only comprised a small farm called Salynges, probably the precursor of Manor Farm, now occupied by Rutlish School, and a couple of cottages.

William Rutlish, court embroiderer to Charles II, owned two copyhold properties in Merton – the White Hart, and Braxtons, on the site of the later Nelson Hospital, now the Nelson Health Centre at Merton Rush. He left £400 in trust from these properties for ‘the putting out poor children born in this parish as apprentices’ in 1687. In 1894 the Rutlish Charity paid for the establishing of the Rutlish Science School, now Rutlish School. The charity is still active, providing grants for local young people entering places of higher education.

In 1600 the priory precinct estate was sold, and within a few years most of the associated demesne land was sold off in small parcels. Those in the centre of the parish were sold in 1607 and the name Bakers, originally a Tudor fieldname, was attached to the whole farm. South of Bakers was Cannon Hill, a wooded area, which was purchased in 1624 by Rowland Wilson, a member of London’s Vintners Company.

Wilson bought other estates in Merton, including the priory precinct in 1625, Blagdon Farm in 1649, and the remnant of Merton Grange at an unknown date, and these all passed to his grandchildren at his death in 1654. In 1703, a descendant, Samuel Crisp, left the bulk of the Grange estate to his elder son, but the younger received 60 acres and a copyhold tenement which became known as Merton Farm, now 120 Kingston Road (see Bulletins 197, 198, 199, 201, 155), the house somehow acquiring the name Manor House in the 20th century. Wilson also set up an almshouse near South Wimbledon crossroads, which survived into the early 19th century.