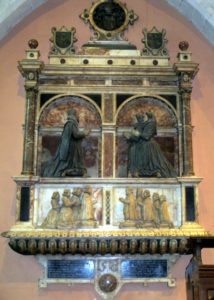 With the Dissolution of the monasteries under Henry VIII, their vast property portfolios passed to the Crown, which leased them out to favoured courtiers and the like, until financial need prompted the gradual sale of individual estates. The priory church and cloister was demolished and the stonework transported to Nonsuch for the foundations of Henry’s new palace, but some of the buildings were converted to secular use. The precinct itself, with the demesne meadows, was leased to Elizabeth I’s cofferer, or household treasurer, Sir Gregory Lovell (see Bulletins 154 and 202), from around 1550 to his death in 1597. His monument is in St Mary’s church, Merton.

Lovell’s second wife, Dorothy, was accused of Catholic recusancy, and only escaped prosecution because of her husband’s influence at court. At the other end of the religious spectrum, and also of the parish itself, was the Lock family (see Bulletins 119, 121, 123, 125 ) who had a country residence opposite the parish church and also owned a farm called Merton Holts (later known as Merton Hall). Sir William Lock was a wealthy London mercer who numbered Henry VIII among his clients. His daughter, Rose Hickman, in her old age wrote down her recollections, which have survived to this day. The family was strongly Protestant, and Rose recalls reading banned literature smuggled in from the Continent by her father’s agents before the Reformation was accepted in England. Under Mary I, Rose’s husband and her brother Thomas were both arrested in 1554 for helping Protestant preachers and, after their release, the Hickmans moved to Antwerp to avoid persecution. Thomas and his wife remained in England and outwardly conformed. In 1553 they had purchased the Rectory of Merton – the right to receive tithes and appoint ministers – which had been appropriated to the priory from its earliest days, and these rights remained in the family until 1664.

Because the priory had long held the rectorial rights, Merton parish was served by a chaplain or curate rather than a vicar, and this continued after the Reformation. By 1562 John Mantell was serving as curate in Merton. A married priest, he had been appointed vicar of neighbouring Morden by royal patronage in December 1552, but resigned after a few months, probably because he refused to give up his wife as required by Mary. He continued to live in Morden, witnessing several wills, before his appointment to Merton. It has long been thought that John Mantell (see Bulletins 198, 149) should be identified with an earlier curate of Merton, John Codyngton, a canon at Merton priory, but recently discovered evidence has disproved this suggestion.

The 400-acre Merton Grange, outside the priory gate, was sold in 1553, and in 1564 40% of the estate was sold on to Richard Garth, who owned the adjoining manor of Morden, and this became Morden Hall Farm. The almost 600-acre farm at West Barnes was sold to Sir John Gresham in 1545, and his heirs gradually sold the property piecemeal over the next 50 years, mostly to their tenant, John Carpenter, though one section, which became Blagdon Farm, was sold separately in 1574.