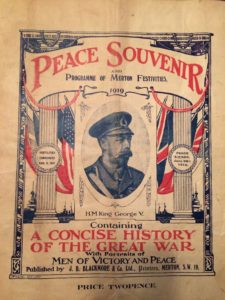 Though hostilities ceased with the Armistice on 11 November 1918, the official end of the Great War only occurred when the peace agreement between the Allies and the Central Powers was signed on 28 June 1919. The British government decided to mark the occasion with an official Peace Celebration and Victory Parade on Saturday 19 July 1919. Each local authority was responsible for arranging their own festivities. Seeing a likely market, Cassell’s the publishers advertised in local papers, ‘for the attention of Peace Celebration Committees’, that they had available a ‘Peace Souvenir, suitable for a Programme of Festivities’.

This document is too large to publish as a single item, so the local section has been extracted and each section is here published as a separate file. In order to retain the centrefold within the local section, two blank pages are inserted.

Read more Quite a number of local authorities took up the offer, among them Bolton, Clevedon-on-Sea, Derby, Ebbw Vale, Knaresborough, Lanark, Warrington – and Merton. The Souvenir was printed on fairly good quality paper, with a patriotic front cover featuring flags of the Allies, a portrait of King George V and small outlines of warships, but no guns. The basic design could be amended, as Warrington’s version features the town arms in place of the King, while the price (two old pence) could be in either a header or a footer, in figures or in words, and the name of the local printing firm could be variously placed. The local firm is invariably named as the publisher, not Cassell’s, presumably being the supplier of the local information and advertisements contained within. Each local authority seems to have ordered and paid for a batch of local copies, which they then offered for sale to the public.

Local information comprises the Programme of Festivities on the centre-fold, and several pages of advertisements for local businesses. This all appears to have been printed by Cassell’s, interspersed with Cassell’s own Story of the War, words and music of the National Anthem and collections of interesting facts and dates. In the Merton Souvenir, the local printer has added a locally-devised four-page insert on much poorer quality paper, listing the names of all the children (with schools where appropriate) entered for all the races in the sports.