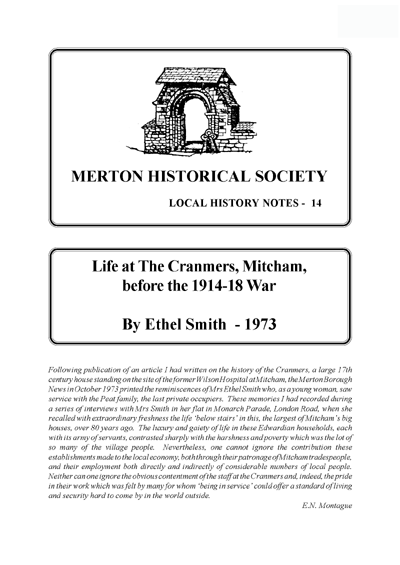 The Cranmers was a large 17th-century house standing on the site of the former Wilson Hospital at Mitcham. Mrs Ethel Smith, as a young woman, saw service with the Peat family, the last private occupiers.

These memories were recorded by E N Montague in 1973 during a series of interviews with Mrs Smith in her flat in Monarch Parade, London Road, when she recalled with extraordinary freshness the life ‘below stairs’ in this, the largest of Mitcham’s big houses, over 60 years before.

The luxury and gaiety of life in these Edwardian households, each with its army of servants, contrasted sharply with the harshness and poverty that was the lot of so many of the village people. Nevertheless, one cannot ignore the contribution these establishments made to the local economy, both through their patronage of Mitcham tradespeople, and their employment both directly and indirectly of considerable numbers of local people. Neither can one ignore the obvious contentment of the staff at the Cranmers and, indeed, the pride in their work which was felt by many for whom ‘being in service’ could offer a standard of living and security hard to come by in the world outside.

These recollections were first published in the Merton Borough News in October 1973.

Extract from the Introduction